Card Money reproduction of the year 1749

As a follow-up to my article on the history of card money in New France, I completed the 1749 card money making, which took much longer than expected. I would like to share with you the steps and thoughts that led to the final result.

Let us first recall that the cards of this period are subject to a royal decree which lays down the rules of manufacture for card money, on March 2, 1729. The allowable denominations are 24 livres (pounds), 12 livres, 6 livres, 3 livres, 1 livre 10 sols (30 sols), 15 sols as well as 7sols and 6 denier. The values ​​of a card thus go exponentially, always being the double of the previous one.
First step: analysis of cards from the collection of the Musée de la civilisation de Québec
The first goal is to determine whether the dimensions of the cards seem standardized or random. The cards have different dimensions depending on the values, the larger values ​​have the larger size cards. In addition, I notice that each card has an edge of a fairly similar dimension, varying between 5.8 and 5.6 cm. I also see that the cards of 30 sols and 15 sols are actually half of the ones of 24 and 12 livres. It will be of great use to me later.
Second step: determine a year for the reproduction
It was the easiest for me, in fact to avoid making an exhaustive list of the Controllers of the Marine Bureau in Quebec City, a list that does not exist on the internet, unlike the governors and intendants of New France. 1749 was the year selected because it is a year that has signed cards (the 24, 12, 6 and 3 livres) and initialed cards (the 30 sols, 15 sols and the 7 sols & 6 deniers). ), so no need to "invent" initials. The name of the controller of the Bureau de la Marine in Quebec for the year 1749 is Bréard for Jacques-Michel Bréard. Thanks to Jean-François Lozier, curator at the Canadian Museum of History in Gatineau for helping me identify it because it was impossible for me to read it.
Step three: Create the cardboard for the card money
Initially, I tried to recreate the cards one at a time by looking at the dimensions, given in the descriptions of the Musée de la civilisation. Out of curiosity, I compared the size of a reproduction of a playing card that I have with a 24 pound card and surprise! They have very comparable dimensions!

I came to the conclusion that the cards were made from the same dimensions as the playing cards (possibly the standardization of card values occurred at the end of the first period of issuance of card money. ). After making a few 24 livres and 30 sols cards, I realize that the 30 sols are half of the 24 livres ones.

This supports my hypothesis that during the second issue of card money, the authorities wanted to resume a system of dimensions already known to the population.

As a reminder, there are two card values that are not present in the collections of the Musée de la civilization de Québec, those of 3 livres and those of 7 sols & 6 deniers.

For the 7 sols & 6 denier card hypothesis, I noticed that a relatively square 6 livres card left a gap when superimposed on a playing card (or 24 livres card). From a material conservation perspective, I deduced that this void must be the size of this smallest value of card money.

I know that my work is manual and geometrically imperfect, but you see where my dimensional assumption for the smallest value of card money comes from. The cards preserved at the Musée de la civilisation also have a variability of 2 mm in width ... The principle is there.
Fourth step: recreate the seals of France and Navarre
This step was the most difficult in my opinion. Unlike the first wave of card money issuance that were made without the authorization of Versailles, from the second wave of card money that began in 1729, they were required to bear the arms of France and of Navarre. According to my observations, the seals used are different between the years 1729-1732 and after 1733. I decided to reproduce the seals which cover the longest period.
My first test was entirely artisanal, made from brass pipe. My engraving tool was unfortunately not as precise as I wanted. The result was disappointing to me, the seal of France, being a single fleur-de-lis, was impossible to identify and the seal of Navarre just as distressing.

After making a digital drawing of the seals of France and Navarre, I turned to the internet and found a craftswoman making metal embossing seals, Ernesta from EAbelts on Etsy.

Step Five: Write the Cards and Forge the Signatures
At this stage, given the time it took me to make my first production of card money, I wondered. Were all the cards that were issued by the government of New France written by the Contrôleur au Bureau de la Marine or could he subcontract? Did governors and intendants have secretaries to officially forge their signatures to avoid these redundant and tiresome tasks? King Louis XIV had several secretaries to draft his official documents in place of the sovereign, and the secretaries of state (ministers) could sign them. Was the practice widespread in colonial administrations at the time? Despite strong suspicions, my questions remain unanswered.
This step is the one that brought me closest to the feelings that counterfeiters must have had when they made their fakes. Do the signatures really look like the originals? Is the difference easily identifiable?
The ink I used is cassel extract. I use a metallic dipping nib (19th century invention), having not yet acquired the technique to make a writing quill with a quill as in the 18th century.
Sixth and last step: affix the seals of France and Navarre
Equipped with my seals, a wooden board and a hammer, I produced some cacophony in my garage during a beautiful afternoon. Again, I wondered who was actually doing the seals on the cards, the administrators who have their signatures on them, or subordinates. I fear that these questions will remain unanswered.
Finally, I realized my dream of owning reproductions of card money!
Reflections
After this process, I wanted to compare my thoughts about card money. Were the proportions of the existing cards the same as those made on real cards? Did artist Henri Beau use the same proportions when making his reproductions? To reiterate, to my knowledge there is no card currency from the first card issuance period.
The values ​​documented by both archival and card money artifacts, on white cardboard, which I reproduced are as follows: 24 24 livres (pounds), 12 livres, 6 livres, 3 livres, 1 livre 10 sols (30 sols), 15 sols as well as 7sols and 6 denier. These denominations are based on multiples of 3. When looking at coins from the same period, they also follow this logic. The silver écu is worth 6 livres, the demi-écu is worth 3 livres, the louis d'or is 24 livres, the demi-louis is 12 livres and the double louis d'or is, unsurprisingly, 48 livres.
Let's take a closer look at the reproduction of the artist Henri Beau dating from the beginning of the 20th century.

The values illustrated by Henri Beau are 100 livres, 50 livres, 40 livres, 20 livres, 12 livres, 4 livres, 20 sols, 15 sols and 10 sols for those that I manage to decipher with the digitization of the document. Its dimensional assumptions are therefore not based on existing cards, as I believed. The values seem to represent more manipulation of money based on multiples of 5 (like the Canadian dollar) rather than multiples of 3 from money of the New France period.
The reflection on the dimensions and denominations of the card money cards dating from 1685 to 1714 continues ... Maybe I will do a project to reproduce card money from this period in the times to come and that will force me to come back to it in more depth.
Hope you enjoyed this article.
Mlle Canadienne
à mai 30, 2021

Card Money reproduction of the year 1749

Hello, As a follow-up to my article on the history of card money in New France , I completed the 1749 card money making, which took much lo... 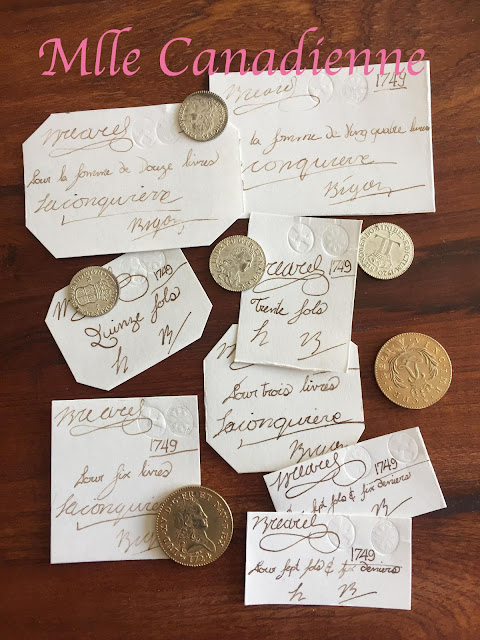